Anna Fascendini, creator and director of SCATéNàTI Unleashed, researcher of theatre for young children lead a 2-day workshop for actors in Madhouse

Recreating the social action of Children

In the workshop there was spaghetti, coarse salt, tree branches, feathers and chains (we’ll hear more of the chains in a minute). We played with the materials, creating narratives, both individually and in pairs. As there was multiple of one material it was best not do much mixing.The idea was to treat the materials like people, interact with them as if they could talk back.

The important part for me was to learn to  present interaction with accessible materials that are environmental, as well as practice non-verbal communication and spatial awareness exercises.

I went to see the performance later. It  was in two parts – watching the actors interact with the material, dance, communicate, then, through presenting the material to every child in the audience, kids are invited to play.

A part of the works is to make kids understand some spaces that they cannot enter and create boundaries.  For example, to have tape on the floor indicating where there is space for the performance and space for the audience. After the watching part is over, you need to take away the borders, showing that they can now enter the stage. Time and space before and after the show, is carefully planned. The performance has no clear ending to make it stand out, to get into it.The role and actions of the parents are very important factors, as they are the ones controlling the children.

The plays are designed for kids between age of a couple of months and 5 years.The youngest member of the audience on Friday was 6 days old. 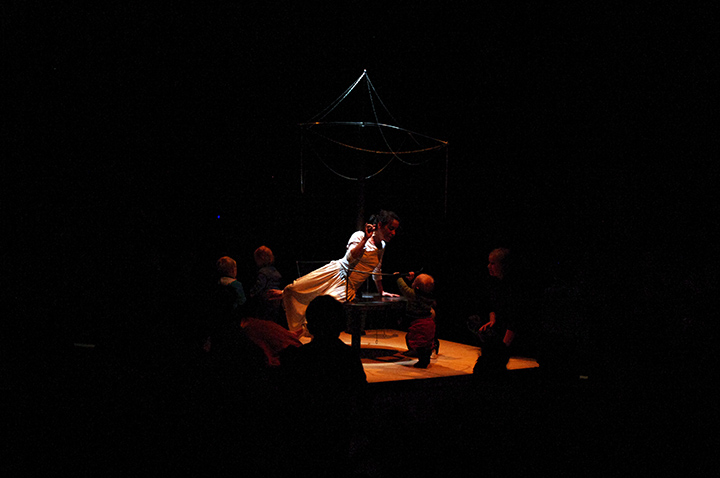 visual diary: A Window a Day